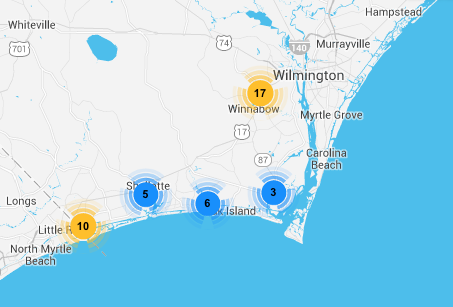 With a population of approximately 116,000, Brunswick County is one of the largest counties in the state of North Carolina. The county is nestled between two major metro areas, which include Wilmington, North Carolina and Myrtle Beach, South Carolina. The climate in this region appeals to many folks, having an average winter- time temperature of 52°. This area is often referred to as a “subtropical paradise”, in which people can escape the cold harsh winters of the Northeast. Brunswick County's average temperature during peak summer months is 80°, which again attracts many people to the region and to the various white sandy beaches of the Brunswick Isles. A variety of different communities and real estate opportunities are available throughout Brunswick County due to its large size. Brunswick County consists of inland towns such as Leland, Southport, Shallotte, and Calabash. It also consists of five main barrier islands composed of Bald Head Island, Oak Island, Holden Beach, Ocean Isle Beach, and Sunset Beach. Brunswick County offers many different types of communities, some of which are popular for boating, others boasting amazing golf courses, as well as active adult retirement communities and gated communities. Let Listed below we will discuss the three main real estate areas of Brunswick County; North Brunswick, South Brunswick, and lower Brunswick County. 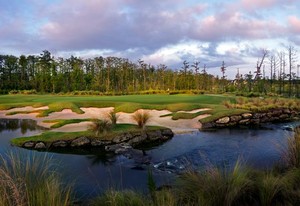 Leland is a booming area and also considered a suburb of Wilmington. Communities in this area have easy access to everyday conveniences in the town of Wilmington. It also gives folks an easy commute to jobs that are centralized in the town of Wilmington. Leland consists of approximately 17 different communities, all within about a 15-minute drive from downtown Wilmington. Brunswick Forest and Magnolia Greens are the two main golf course communities in the town of Leland. There's also a brand-new community that is also putting in an 18-hole golf course called Compass Pointe. Many other communities situated in the Leland area are rich in a variety of  amenities to appeal to most everyone, such as walking trails, clubhouses, tennis courts, pools, and much more. Click on the interactive map above to check out the different communities and see where each is located. 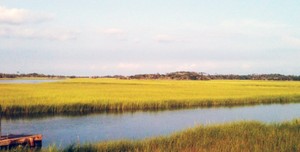 Just 25 minutes south of Leland lies the quaint town of Southport. Southport sits behind Oak Island as well as Bald Head Island, at the mouth of the Cape fear River. Southport is home to approximately 9 different master planned communities that are situated just behind the white sandy beach of Oak Island. Residents here can find communities with multiple amenities, some of which have water access and others boasting beautiful golf courses. Southport is home to St. James Plantation, Winding River Plantation, River Sea Plantation, Palmetto Creek, Arbor Creek, and many more. The area of Southport appeals to those that want to be closer to the beach rather than closer to the city.

If you're looking for more of a laid-back atmosphere, you should definitely check out the communities that sit just behind Ocean Isle Beach.  River’s Edge Golf Club and Plantation, Brierwood Estates, Rourk Woods, and Bricklanding are all communities with well appointed amenities, located just miles from the beach. These communities are sought after by boaters and golfers alike, as well as many retirees. Residents report that they enjoy being minutes from the beach in an area is well known for its laid-back vacation destination. 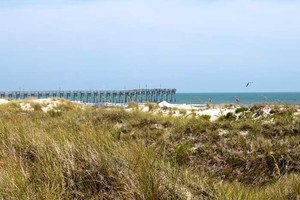 One of the last barrier islands in North Carolina before hitting the South Carolina line is the quaint town of Sunset Beach. Sunset Beach is very similar to Ocean Isle Beach due to its small town beach atmosphere. There are many communities in this area that pride themselves on great golf, excellent seafood, and incredible entertainment. This area in general is a golfer's paradise, typically featuring the best of both worlds. There are many golf courses to choose from and incredible beaches to visit. This area, also known as Calabash, is home to many communities such as Ocean Ridge Plantation, Brunswick Plantation, Sandpiper Bay, Sea Trail plantation, and other non-golf communities such as Devaun Park and Sunset Ridge. Check them out today!